Sitewide Flash Sale!
Save up to $30

Acclaimed as one of the world’s great cheeses – in fact, often called the “Queen of Cheeses” – velvety French Brie is characterized by a downy-white edible rind and a cream-colored, buttery-soft interior that oozes at the peak of ripeness. Though several countries produce this popular cheese, we have selected the finest selection from France. Considered the best in the world, the French tradition of making Brie dates back to the 8th century. Sorry, is that right? Let us check the books for a moment… uh huh… uh huh… yup, says it right here—the 8th century! Wow!! Actually, there is some evidence that places Brie’s origins all the way back to the 5th century! But definitive documentation comes to us from Charlemagne’s chronicler, Eginhard de Saint Gall, who reported that the Emperor enjoyed it at the Priory of Rueil in the town of Brie in the year 774.

Clearly the French have the art of making Brie down to a science, and we are proud to deliver the quality and flavor that an authentic cheese such as this offers. The selection of this great cheese is all-important, which is why we employ the expertise of the folks at Zingerman’s Deli, where two staff work full-time traveling the world in search of the finest farmhouse cheeses (work many of us would envy). Brie must be perfectly ripe for the best flavor, so we bring you one that is plump and resilient to the touch, with a rind that might show some pale brown edges.

It is an interesting story how this cheese earned its regal subtitle, “The Queen of Cheeses.” At the Congress of Vienna in the year 1815, representatives of 30 nations were brought together after the Battle of Waterloo to reconstruct the map of Europe. As a reprieve from the serious business of rehabilitating whole regions of Europe after the devastating battles that took place, these gentlemen invited those in power to prestigious balls and banquets. On one such occasion, several were discussing the merits of various cheeses, at which point they decided to choose and present a cheese of their liking at the next celebration. Monsieur de Talleyrand brought a Brie, which was immediately and unanimously proclaimed “Queen of Cheeses.”

The rind on any cheese plays a very important role, but in no other cheese-style is it as responsible for affecting the flavor and texture as much as in Brie or other mold-ripened cheeses. With these cheeses, the maturing process is critical, for without the proper care, the rind can die or, worse, overpower. In either case, the cheese is lost. It is an important role of the affineur (those who deal with the production and care of cheese) to coax the rind to flourish, and then select just the right moments to “tame” the rind so the cheese evolves into the alluring, tasty mystery that captivates so many.

Made with phenomenally rich milk, Brie is rich and creamy with a center that could be described as voluptuous. The flavor is subtle and somewhat unique—wild grasses and flowers flavor the milk used to produce the product so each variety of Brie has its own flavor, depending on the flora of a particular time and place. Brie is an excellent dessert cheese. Pair it with croissants, soft bread rolls, melons, or grapes. It’s a good party cheese as well and often enjoyed with a Bourgogne, Cabernet, or Médoc wine. Or try it with a fruity Japanese Plum wine. Its silky, unctuous texture and nutty, whipped cream flavor make Brie particularly good with dry champagne. 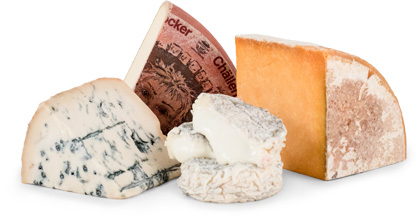 You might receive a Gaperon, originating in France during the 14th Century, an
authentic Lancashire by Ruth Kirkham, and an Italian Taleggio matured in the
caves of Valsassina…all in one shipment!